Have you ever wondered what everything around us is made up of?

In the past ten years one of the most significant achievements in physics has been the discovery that everything in the entire universe is made up from a small number of elementary particles and a few fundamental forces. Pretty amazing, huh? This is called the Standard Model of particle physics.

Our everyday objects, from water to the kitchen sink, are made of molecules, a bunch of atoms bonded together. Each atom consists of a nucleus at the centre with negatively charged electrons orbiting around it. The nucleus itself contains positively charged protons and neutrally charged neutrons. All elements can be described by how many protons, neutrons and electrons each atom has and hence all materials and elements can be described by this structure.

Atoms compose every solid, liquid, gas and plasma you can think of, either being neutral atoms or ionised (having a net charge). Atoms are so small they are of the order 10^-10m, which is 10 Billionth of a metre!

What happens when we try and look on an even smaller scale? What are protons and neutrons?

These elementary particles have no discernible size or structure but we do know some properties of the two types.

They can be organised into 3 generation with the first generation quarks creating the most stable particles, protons and neutrons.
Each generation of particles gets heavier in mass. The heavier they are the more energy is needed to bind them and can make the resultant hadrons more unstable with short lifetimes.

Another difference between the two types is that Leptons exist as free particles. However, quarks existing as free particles has never been observed. They always form bound states of quarks called Hadrons of which there are two types; Baryons and Mesons.

Baryons consist of 3 quarks. For example, a proton is a baryon and is made up of three quarks; two up and one down quark giving a net charge of +e and similar for a neutron which consists of one up and two down quarks giving a net charge of zero, both as expected. Mesons only consist of a quark and an antiquark such as a pion which has an up quark and a down antiquark. There are many different types of hadrons as can be seen in figure 5.

All of these quarks and leptons have an antiparticle partner. These antiparticles have the same mass as their corresponding partners but have opposite charge and angular momentum. This is antimatter. An example you may have heard of is the anti-electron known as the positron. When these partners meet, they annihilate each other conserving charge and momentum.

These elementary particles make up everything in the universe together with four forces. The four forces are Eletromagnetism, Strong Interaction, Weak Interaction and Gravity. They cause particles to interact with each other through force carriers called gauge bosons.
They interact by exchanging the corresponding gauge boson to the force.

The electromagnetic force is the exchange of a photon; a particle representing a packet of light, this force holds atoms and molecules together and is the force between charges. The strong interactive force is the exchange of a gluon which transmits the force that binds together quarks in a hadron and is responsible for holding together all nuclei. The weak interaction is the exchange of intermediate vector bosons W and Z. This interaction changes one quark flavour into another and is the cause of the transmutation of a proton to a neutron which creates deuterium fusion that takes place in the sun. Its role in changing quarks is also involed in many nuclear decays. Gravity is the weakest of the four forces, it is an attractive force between two masses where a massless graviton particle is exchanged. This particle has not yet been directly observed. Despite being the weakest of the four, the force of gravity is the most dominant in the universe for shaping the structures of stars and galaxies.

The most recently discovered scalar particle, the Higgs boson, is needed in the standard model to explain why the W and Z bosons have mass and hence why all particles have mass, however this particle deserves its own post entirely.

All of this information, and hence what the entire universe around us is made up of, can be summed up very neatly in the picture below – the standard model of particle physics. 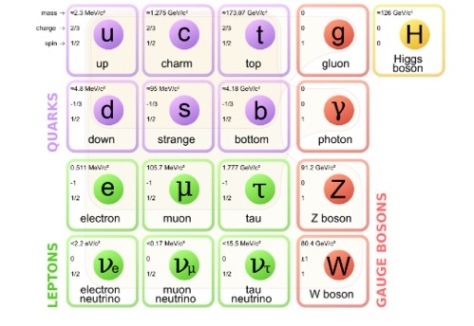